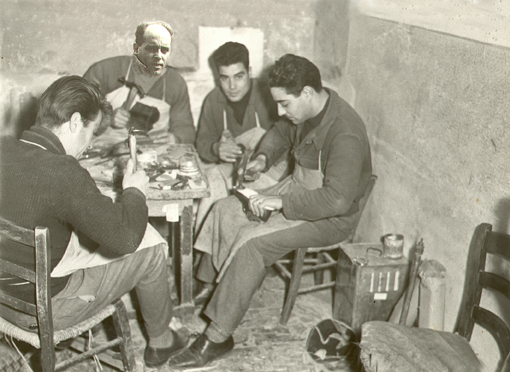 The Sguerri family-run firm was founded at Malmantile with the name L’alpina in 1924. The business was immediately successful and in 1926 the company was awarded a prize at the International Exhibition of Paris, and thus they changed their name into Premiato calzaturificio L’alpina.  They manufactured men’s and women’s footwear by hand in the ancient Tuscan tradition.

With the advent of the Second World War there was a setback, but the recovery coincided with the reconstruction, when the second generation of the Sguerri family stepped in. The new generation began business by producing children’s shoes, a production that, starting in the Fifties, was converted into shoes for men and women. The younger generation was not lacking in inventiveness nor desire to experiment, and hence they used the most advanced construction systems.

Those were the years of the so-called ‘economic boom’ and this also pushed the Sguerri company – which meanwhile had taken the name of Lorans- to begin exporting their products to Europe, becoming known for the quality and the style of their footwear. In 1974 the production was expanded and aimed solely on the female market. In those years the company was awarded the national award of the Messaggero economico for its professional activities. The construction of a broader production plant at Malmantile and the transformation of the firm into an s.r.l. company (Ltd.) and the change of its name to Floran’s date back to the 70s.

Since the 80s the shoe factory has been producing women’s shoes only for the export market, from Asia to Australia. Its main customers are, however, in Europe and the US. It is in that period that the third Sguerri generation started to play an active role in production.

The combination of tradition and innovation marked the production philosophy of the Company, acknowledged also by the Association Civiltà del Lavoro, which, in 1999, awarded the management team with the coveted Mercurio d’oro prize.

In 2007 the company moved its production to Limite sull’Arno, an industrial area better served and connected with the infrastructure nodes of the footwear area.

Floran’s shoe factory has been producing shoes for almost one hundred years. A handcrafted production of women’s shoes made with modern methods and inspired by the Tuscan tradition of leather processing. Floran’s is in the heart of the Florence leather and footwear district  which has made the made in Italy brand famous worldwide.

The artisanal production of footwear is made by hand and with methods that guarantee the quality at the right price.

Made in Italy production

The entire production cycle takes place at Floran’s and in the leather and footwear district in the Florence area.

We help designers to develop shoes in line with fashion trends and we follow all production stages.

We follow the design, the leather cutting, the hemming steps, the mounting, the finishing and the quality control stages.

We make finished products and produce women’s shoes in subcontracting. We provide an (almost) infinite choice of styles and have the skills to assist the design offices in the construction of new trendy models.

You can find out more about which cookies we are using or switch them off in settings.

This website uses cookies so that we can provide you with the best user experience possible. Cookie information is stored in your browser and performs functions such as recognising you when you return to our website and helping our team to understand which sections of the website you find most interesting and useful.

You can adjust all of your cookie settings by navigating the tabs on the left hand side.

Strictly Necessary Cookie should be enabled at all times so that we can save your preferences for cookie settings.

If you disable this cookie, we will not be able to save your preferences. This means that every time you visit this website you will need to enable or disable cookies again.

This website uses Google Analytics to collect anonymous information such as the number of visitors to the site, and the most popular pages.

Please enable Strictly Necessary Cookies first so that we can save your preferences!